According to François Nédey, Member of the Executive Committee of Allianz France, administrator of Megacities Institute and co-leader of the international ecosystem Autonomous Vehicles of the Allianz group, “These driver assistance systems help to improve road safety. In France, the proportion of accidents occurring at low speed in the city center is very important. In particular, we observed that automated braking in the city center considerably reduced the number and the severity of accidents because shocks are less brutal at low speeds“.

“For every driver, it would be necessary to be put in the emergency braking situation when handing over the vehicle keys to get a first experience,” says Franck Cazenave, Director of Smart Cities and Autonomous Vehicle for Bosch France and President of Megacities Institute.

79% of drivers regularly activate the adaptive cruise control, 19% do it sometimes. Drivers appreciate this driver assistance for the safety provided. “For 48% of the drivers surveyed, the safety provided by adaptive cruise control is better than they expected before using it. In fact, 86% of drivers say that the risk of malfunction is less than or equal to what they thought before they had the experience” says Odette Dantas.

The adaptive cruise control is more and more often coupled with the function of lane keeping systems in the traffic way. “In a turn, for example, the vehicle will stay on the lane chosen by the driver. If the driver does not interfere on the direction of the vehicle, an automatic correction is made,” explains Franck Cazenave.

Only 23% of drivers regularly use this driver assistance, which is more than three times less than the adaptive cruise control. Drivers whose vehicles are equipped with this feature for parking are not satisfied because of the “slowness” and “imperfection” of the system. Drivers want a faster system, especially for narrow parking spaces.

Looking ahead, drivers believe that emergency braking (51%), adaptive cruise control (54%) and automated parking (18%) are essential for their car. According to François Nédey, “in France, 43% of the dead and 70% of the seriously injured are vulnerable users, which means pedestrians, cyclists and motorcyclists. The trajectory towards self-driving cars will contribute to the reduction vulnerable users deaths“.

The last axis of the study concerns the self-driving car. It means a vehicle without any driver intervention, a “robomobile”. 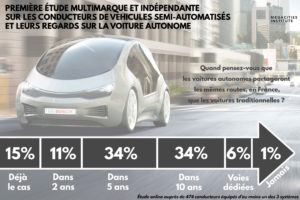